Not Okay is an upcoming American comedy satire film, written and directed by Quinn Shephard.

Not Okay is set to be released on July 29, 2022, by Searchlight Pictures on Hulu.

The movie, Not Okay runtime is 1 hour 40 minutes.

Not Okay Age Rating is R for language throughout, drug use, and some sexual content.

Synopsis of the Movie Not Okay

Danni Sanders (Zoey Deutch), an aimless aspiring writer with no friends, no romantic prospects, and – worst of all – no followers, fake an Instagram-friendly trip to Paris in the hopes of boosting her social media clout. When a terrifying incident strikes the City of Lights, Danni unwittingly falls into a lie bigger than she ever imagined. She “returns” as a hero, even striking up an unlikely friendship with Rowan (Mia Isaac), a school-shooting survivor dedicated to societal change, and scooping up the man of her dreams Colin (Dylan O’Brien).

As an influencer and advocate, Danni finally has the life and audience she always wanted. But it’s only a matter of time before the facade cracks, and she learns the hard way that the Internet loves a takedown.

The movie, Not Okay includes:-

Release date of Not Okay movie 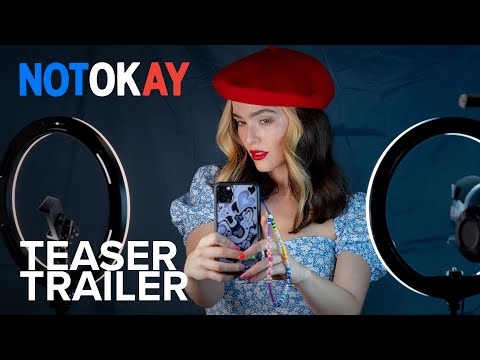 Who is in the cast of Not Okay?